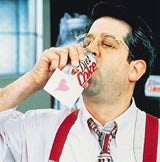 The move comes as part of the first wave of agency appointments made by Coca-Cola GB in a review of its agency arrangements, which was triggered by the “Think Local, Act Local” strategy of holding group the Coca-Cola Company.

Coca-Cola GB and Ireland marketing director Charlotte Oades says: “Universal McCann will now be working with BBJ/Carat, and together they will give us an even greater depth of consumer and media insight, as well as more innovative and creative media planning. Given the dramatic expansion of our media mix and the new technologies we are exploring, this configuration will serve our needs best.”

The London office of Wieden &amp; Kennedy has retained the Diet Coke creative account, which is worth about &£7m for the 12 months up to September, according to the latest figures from MMS, .

There are still decisions to be made on a number of other Coca-Cola GB creative accounts. Publicis currently handles the main &£18m Coke account; Mother has Lilt (&£2m); Leagas Delaney has Fanta (&£3m); Lowe Lintas has Sprite (&£1m); and Leo Burnett has Five Alive.

Coca-Cola is also reviewing some of the agency arrangements inherited after the purchase of various brands from Cadbury Schweppes in 1998. These include: Schweppes and Dr Pepper (&£4.2m) which are handled by Rainey Kelly Campbell Roalfe/Y&R; and Oasis which is looked after by TBWA London.