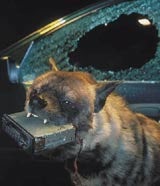 Windscreen repair outfit Autoglass has handed its &£2.4m media planning and buying account to Universal McCann. The account was previously held by Pure Media, the media division of Chime Advertising and Marketing Services, which contracted out the media buying to Carat.

Autoglass’s advertising is created by HHCL/Red Cell, and marketing director Jane Wiley says there are no plans to review the business. The agency won the account in February last year – when it was still HHCL &amp; Partners, part of the Chime Communications group (MW February 21, 2002). Since then, the agency has become part of WPP Group’s Red Cell network.

Autoglass used to sponsor Chelsea Football Club, but relinquished the sponsorship in 2001 to Emirates and switched its focus to advertising. Recent advertising has carried the strapline “Insist on Autoglass. We fit safety as standard”, and emphasised the importance of the windscreen to a car’s strength. The company is planning a TV campaign for January.

Autoglass is based in Bedford and is a subsidiary of Belron International, which has an estimated six per cent share of the global vehicle glass replacement market.