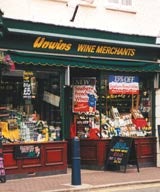 Off licence group Unwins is to recruit a senior marketer to oversee all the company’s marketing, including a planned radical overhaul of the company’s retail outlets.

Chief executive David Wetz, a member of the family which owns Unwins, says the group wants to divide its estate into a number of categories – wine only, beer only, mixed, and convenience stores (the company runs 17 convenience stores on TotalFinaElf petrol station forecourts). It has also set up a new format for “test-bed” stores, in partnership with Guinness UDV, Gallo, Rothmans and Interbrew. The four suppliers have agreed to contribute towards the costs of running the stores in return for pooled sales information.

As part of that move, and following the redundancies and consequent reorganisation of the company’s headquarters, Wetz confirmed that Unwins is looking for someone to take control of marketing and merchandising. He is unwilling to refer to the position as either a marketing or merchandising director.

Unwins, which has 420 stores and 2,500 staff in the UK, has been plagued by rumours that it is up for sale due to family feuding, and that its bankers are pressuring it to agree a refinancing package. Wetz, however, roundly denies any such suggestions. He says: “We are absolutely not for sale.”