Procter & Gamble is giving Olay a subbrand with the launch of its premium skincare range The Olay ProX (MW last week). While this “professional” range looks similar to its expensive counterparts available only in department stores, Olay Pro-X will be launched in mass outlets.

Olay’s gamble with the high-end market comes at a time when UK’s facial skincare market was valued at 673m in 2008-11-06 and is projected to touch 833m by 2013. The anti-ageing segment alone is valued at 167m this year, up from 125m in 2006. “This is a calculated strategy by P&G to get a wider share of the skincare market with Olay, particularly when UK consumers are gripped with age-orexia,” says Alexandra Richmond, Mintel senior beauty and personal care analyst.

Launched in 1949 in South Africa by Graham Wulff, Olay was known as Oil of Olay in the US and as Oil of Ulay or Oil of Olaz elsewhere. Since then, it has changed hands several times, with P&G buying the business in 1985. P&G rebranded it as Olay globally in 2000.

In the UK, Olay was the mass-market leader last year, taking a 20% share of the sector along with L’Or顬’s Garnier. Boots, with brands including No7 and Natural Collection, has a 19% market share, while Nivea and Neutrogena are not far behind.

Olay’s ProX is P&G’s first attempt to target an upmarket segment with six products, each to retail at about 30 and a sample starter kit priced at 40. It consists of six items including three anti-ageing products.

Value Engineers brand consultant Edouard Schwebel says: “With an already strong portfolio, this is a right move by Olay in principle. But at 30 a bottle, it is a little too risky when today women are more concerned about bread and cereal prices.”

He says that while the range is still aligned with its other products, it will be a challenge to convince customers to shell out double the price for Olay’s premium version when they perceive it as a mass-market product and not a premium one. Until now, Olay has competed against the likes of Johnson & Johnson’s Neutrogena and Garnier. With ProX, it aims to compete with brands such as Clinique and Lanc

However, Colin Hession, managing director of Colin Hession Consulting, says it a “low-risk” strategy. “P&G must have noted the trade down taking place from prestige to upper-mass and it is staying with mass.”

The new range is aimed at customers who are likely to buy mid- to premium-range products from department stores.

Richmond says: “Its packaging resembles premium brands such as Clarins. Coupled with the use of the word Professional and its availability in mass outlets, it gives it a premium edge.”

But another analyst says mass-market brands such as Olay and its competitors are developing a “mass-tige” appeal, yet are unlikely to move much more upmarket.

Schwebel adds that unless Olay’s marketing strategy communicates that “it is not just a product push targeting sales but a real radical innovation”, Olay cannot move upscale. He says that it should follow the brand strategy of Boots No7, which proved its effectiveness and efficiency, rather than “Gillette-like marketing”.

With its roots in the mass market, Olay’s challenge is to convince women to choose its high-priced mass-market offering against established premium products when purses are already feeling the pinch.

1959 The brand is launched as Oil of Ulay in the UK and Oil of Olaz in other territories. In 2000, it becomes Oil of Olay globally

1970 Olay is acquired by Richardson Merrill, which later became Richardson-Vicks

2008 Olay ventures into premium skincare with the US launch of Olay ProX range. 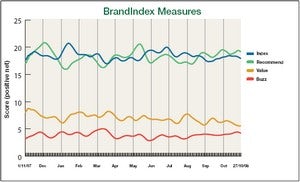