The Urban Outfitters website stated “Drink like the rebel you are with this F*** My Liver Hip Flask”, while text on the product itself said “F*** MY LIVER”. A complaint questioned whether the site was being irresponsible because it could encourage excessive drinking.

Urban Outfitters said it was its intention to produce a funny and light-hearted ad to attract the attention of consumers that reflected its “street style” attitude. The retailer said it did not encourage drinking or disregard for health and pointed out it does not sell alcohol beverages.

However, the Advertising Standards Authority found a “strong link” to alcohol consumption between the purpose of a hip flask and the reference to “liver” and said the phrase contained a message to actively disregard well-known health advice. It banned the ad from appearing in its current form again and told Urban Outfitters not to use words or phrases that portrayed drinking as a challenge again.

Meanwhile, GiffGaff’s “Different Takes Guts” online video ad campaign has also been banned after the ASA found it was “offensive and distressing”. The ad showed people dressed in white, jumping into an empty swimming pool before being covered in blood, guts and bodily organs.

GiffGaff said it did produce the ads with a “sense of responsibility” and that the ads had been created to celebrate Halloween by taking a humorous rather than frightening look at how being different “takes guts”. They also said it was targeted at those aged over 18 and by keyword interests such as “horror” and “scary movies”.

The watchdog ruled that while the ad did appear around Halloween, it was shown before videos on YouTube not related to Halloween and did not contain any warning about the ad’s content, nor was it age-gated. It said the images were sufficiently realistic to cause “offence and distress”, particularly to children, and therefore banned the ad. 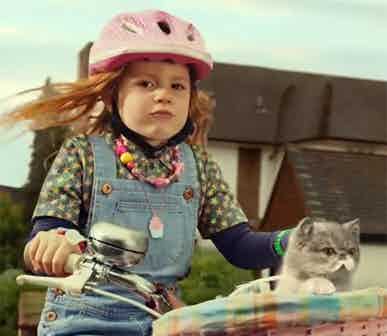 First it was dancing ponies, then a pug dog in a knitted party hat and now a bike-riding child singing 80s AOR backed by a harmonising cat.