As US troops wage war, advertisers are grappling with their consciences over whether to press on with campaigns on the home front, says Polly Devaney

In these testing times and with the obvious correlation between ad spending and the economy, many Americans are asking whether marketers pulling out of or “going dark” on advertising makes sense. Who does it really help, apart from those who would love to see the US economy in further turmoil?

If advertisers pull the plug on ads, media companies’ revenues slide dramatically – yet when covering a war media companies’ costs skyrocket. And with the knock-on effects on consumer confidence, spending and jobs, it’s a vicious cycle. But the question remains as to what to do, if not to be seen as doing nothing.

Of course it’s understandable that many marketers don’t want their brand’s ads placed next to grave, graphic images of war – especially when the products they are selling often seem completely trivial in light of war. There is also the concern that many ads are too irreverent for such serious times. There is certainly a general feeling that anything celebrating ostentatious consumption should not be advertised at all.

But US media companies are trying their best to do something about it. Many broadcasters and publishers are creating separate and definable sections for war coverage in print or on television that do not contain advertising, while the rest of the programme or journal will feature advertising and no war. Such a policy allows advertisers to distance themselves effectively from the conflict. CNN dropped advertising for three days on its main channel and for one day on its Headline News channel last week at the outbreak of the war, while Time magazine has created a special section for war coverage that will not carry any advertising.

Many US advertisers are definitely finding themselves stuck between a rock and a hard place. While brand owners do not necessarily want to be associated with grisly images of combat, statistics show that more people watch TV during war time, so logically it is in fact a better time to advertise. Many US media watchers believe there will be a swing towards advertising in more defined contexts. Cinema ads are expected to become more popular, as the audience will be mainly interested in pure escapism – and there is no chance of an ad being placed next to war footage at the cinema. 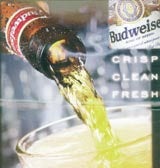 And while questions were raised about the sensibility of going ahead with the 75th Academy Awards on Sunday, it was stated by The Academy that the show would go on but that The Oscars “would be sensitive to world events”. By the time war broke out it was too late for most of the Oscar advertisers to bow out graciously without losing the $1.3m (&£827,300) they had paid for their spot. After a weekend of solid war coverage, many Americans were undoubtedly looking forward to the light-hearted frothiness of the Oscar ceremony. However, the awards’ broadcaster, ABC, showed war-related newsflashes during the toned-down ceremony and the actors themselves demonstrated uneasiness at such frivolity at a time of war, so the escapism was somewhat limited this time.

Then there is the issue of the content of the creative work. Many marketers are rigorously checking the ads they are airing for anything that could be deemed to be in bad taste in the current climate. AT&T and Cox Communications were among the first to announce war-related ad changes. AT&T decided to pull the plug on its new ad campaign – at least for now – as it focused on current affairs, including arguments about war, gun control, cloning and other controversial issues. Cox Communications decided to alter the ads it had created for its cable news content in the light of the war. Rather than the humorous and wacky scenarios in the original creative execution, Cox decided to make reference to the fact that the cable news channels it provides could keep consumers more informed on world events.

Other advertisers that changed their campaigns with the outbreak of hostilities were the US Army and the US Marines. The US Army spends about $147m (&£93.5m) a year on marketing and advertised heavily on CBS during the network’s broadcast of the college basketball tournament. It changed its creative execution to a spot titled “Creed”. The slot, featuring unit crests, promotes the message that the army will always win with honour and courage, and is similar to an ad the army ran immediately after the conflict in Afghanistan. It carries the ongoing “Army of One” tagline. Last week the Marine Corps launched a new TV ad featuring scenes of marines in Afghanistan, which they hope will appeal to the patriotic nature of many Americans. While neither the marines nor the army are making direct references to the current conflict in Iraq, the inference is clear.

The marines are still running an ad showing a young man climbing up Monument Valley in Arizona and Utah – meant to symbolise the challenge of becoming a marine. In that campaign, a man climbing the valley sees various images of marines as he climbs and once he reaches the top, he is welcomed by a team of World War II-era marines.

Both ads use the strapline, “Marines, the few, the proud.” The Marine Corps spends about $18m (&£11.45m) a year on marketing. The marines are hoping the new ad will get public service as well as paid airings – and there could well be several openings in broadcasters’ schedules – although even ads for the armed services during war coverage would not seem to hit quite the right note with viewers.

As with post-September 11 advertising, it is expected that the US flag will feature more predominantly in advertising, in an attempt to appeal to the patriotism of most Americans.

However, marketers need to give careful consideration to whether their product or service is in any way linked to the war effort and should avoid at all costs being seen as “bandwaggoning” or even worse, trying to profit from the situation. There needs to be an obvious link between any patriotic message and brand image. Budweiser recently created an ad featuring runners carrying US flags around the country: consumers didn’t see the link between that image and Budweiser.

It will certainly be interesting to see whether any brands that are directly linked with the war effort will attempt to get the message across that they are aiding the country at this testing time. When it comes down to it, it appears that saying something is better than “going dark”; pulling the plug on advertising campaigns could be the most cowardly and ultimately harmful option of all.