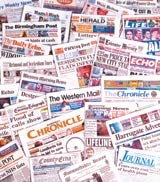 The regional press’s ongoing campaign to secure a greater share of national advertising might be on the verge of taking a fresh turn.

Representatives from the UK’s regional press body, the Newspaper Society, has been on a fact-finding mission to the US to see how the American central sales operation, the National Newspaper Network (NNN), has increased regional newspapers’ revenue.

Total ad spend is falling in the wake of the economic downturn, but regional press remains robust, with its share of ad revenue for the first quarter of 2002 increasing to 26.4 per cent. The regional press’s ad revenue for the first quarter increased 0.7 per cent on last year – making it the only main UK medium to record an increase in advertising revenue.

The Newspaper Society can play a major role in encouraging advertisers to use regional press in a national campaign, but eventually it has to hand the reins over to regional sales houses to complete the deal. This leaves the advertiser facing the labour-intensive task of contacting the sales houses of the five major regional publishers – Trinity Mirror, Newsquest, Northcliffe Newspapers, Johnston Press and Associated Newspapers (according to the Newspaper Society) – to negotiate the best deal around their respective ratecards.

Many industry observers believe that a central sales point would simplify the process and make it less time consuming. Newspaper Society marketing director David Hoath says: “We are aware that there are successful models of central [sales] points elsewhere in the world, particularly in the US, and are investigating what can be learned from them.”

The NNN has a client list that includes Tropicana, Volkswagen, Oil of Olay and Hewlett-Packard. It does not charge a retainer for its services, but receives a fee on delivery of business. It targets high media spenders, but low newspaper users to avoid cannibalising strong newspaper categories, such as retail and entertainment. The categories it handles are packaged goods, pharmaceuticals, automotive manufacturing, computers, software and-commerce.

UK publishers, while not overly enthusiastic about the possibility of a central sales house, are not totally opposed to the idea. Much depends on the structure of the organisation and many feel that any such body would have to be totally independent from the Newspaper Society. Newsquest Media Sales managing director Lisa Bourne points out that there is a greater need for a centralised sales house in the US, where there are no national newspapers to speak of.

in the UK has eased for advertisers as the number of sales houses has decreased through consolidation of regional newspaper groups. Gary McNish, managing director of sales house amra, which represents the largest regional press group Trinity Mirror, as well as third-party publishers, says that over the past ten years the number of sales points has shrunk from 26 to five, which represent 88 per cent of the sector by circulation.

Leading sales houses have also set up dedicated business teams to create a “regular and on-going relationship with major national advertisers”. Nish adds that publishers already co-operate when approaching advertisers, and partnerships have increased following consolidation. McNish says: “I have reservations about a combined sales house as there is still competition within the medium.”

The regional press has experimented with the idea of a national sales house in the past. The now defunct independent sales house The Word, which was set up by regional publishers in 1988, offered a single buying point for national campaigns. However, observers say that it was not flexible enough for clients, only represented some publishers and caved in too quickly in negotiation.

Bourne points out that any central body would have the remit to recommend titles to potential clients and would therefore have to be impartial to retain the publishers’ trust. She believes that the publishers owning the large metropolitan dailies are set to benefit most from national advertiser investment, which would place other publishers such as Newsquest, which does not sell titles in metropolitan areas, at a disadvantage.

The question of a central sales house may become irrelevant if further consolidation occurs. For instance, Johnston Press bought Regional Independent Media in March and industry observers believe more mergers are on the cards. Numis media analyst Richard Hitchcock says that while there will be a quiet period because of an “uncertain” outlook and a “nervous” stock market, there are still potential takeover targets such as the Eastern Counties Newspaper Group.

If, as a result of further consolidation, the number of regional sales houses falls from five to two, as some industry experts believe, then there will be little use for a central sales house.