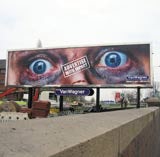 The Advertising Standards Authority is investigating 11 complaints against a trade poster for outdoor company Van Wagner. The ad has been criticised for being disturbing and encouraging violence.

Created by Spirit, it portrays someone with bruised eyes and a battered nose, and uses the tagline “Advertise with Impact”.

These complaints follow a recent incident involving a Van Wagner billboard. A woman was taken to hospital after the outdoor company’s 96-sheet billboard fell off Blackfriars Bridge in London onto her car (MW February 26).

At the time Southwark Council claimed that the billboard did not have planning permission.

Separately, the ASA has objected to a mobile poster ad for Ann Summers, which shows a woman in a G-string and bra astride a model horse.

The tagline says: “Ride a Cock Hoarse”. The advertising watchdog has upheld the complaint and has asked the sex shop to take down the posters because of their offensive nature.