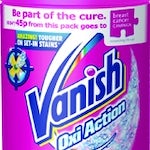 Wear it Pink is the charity’s biggest national fundraising initiative and encourages people to wear pink for a day and donate £2 in support of the charity.

Vanish, which comes in bright pink packaging, will promote the campaign across five of its pink packaged products and will make a donation to the charity from each pack sold.

Reckitt Benckiser hopes that the sponsorship will raise £250,000 to help fund breast cancer research and raise awareness of the campaign.

The sponsorship will be supported heavily in-store and via Vanish’s television advertising campaign which will run in the autumn.

Wear it Pink takes place during Breast Cancer Awareness Month in October. This is the first time the campaign has been sponsored.

Special packs of Breast Cancer Campaign Vanish will be available in supermarkets and stores from September.

RB UK marketing director Stefan Gaa says the tie up is a natural link for Vanish because its core customers are women aged 30-55.

He adds that the sponsorship “is just the beginning of a very successful long term partnership”.