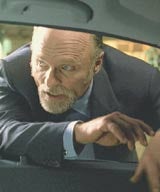 Vauxhall has drafted in Hollywood actor Ed Harris to star in advertising for the new Vectra.

The ads, which will be shown tomorrow (Thursday), aim to show how different the new Vectra model is to its predecessor.

The ads take as a theme a court-room drama, with Harris playing the role of an American lawyer out to prove the car has changed. Harris is best known for roles in films such as Apollo 13 and A Beautiful Mind

The new Vectra goes on sale this week. It faces tough competition in a crowded sector. The past 18 months have seen the launch of the new Ford Mondeo, Renault Laguna and CitroÃÂ«C5.

The Vectra is often associated with sales reps. Motoring pundit Jeremy Clarkson labelled the old Vectra “the acme of dull and boring”. His comments were allegedly responsible for reducing sales of the car.

Vauxhall communications manager Patrick Dunster says he hopes the new Vectra will sell well to private buyers, not just to corporate fleets. He refused to comment on the media spend behind the ads.

The campaign is a chance for Lowe to prove itself to Vauxhall. In March, the car company said it was looking for a second agency. Lowe, Delaney Lund Knox Warren and DFGW have all pitched to handle advertising for the Vauxhall Corsa. A decision on the account is expected next week.

Finance company Police Mutual has appointed Clare Preston to the newly created position of marketing director. Marketing was previously handled by business development manager Mark Charnock. The new position has been created to increase the importance of marketing at the boardroom level. Preston joins from building society Birmingham Midshires – owned by HBOS – where […]

The Diary loves photographs. Many a long hour on holiday has been spent with a telephoto lens on the hotel balcony, and the results are always eagerly awaited. You can imagine the joy, then, when a “Priority Service” envelope – with free film – was dropped onto the Diary’s desk. Was this a forgotten film? […]

You’ve got to laugh: everyone’s at it these days. Even M&A Group, a select club whose membership comprises some of the world’s most aggressive and renowned chief executives, has decided to join the rebranding game, only three years into its present identity. Cynics have not been slow to suggest a connection between the timing of […]