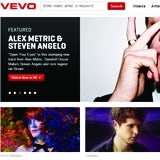 The online music video platform, a joint venture between Abu Dhabi Media, Sony Music Entertainment and Universal Music Group, hasn’t previously been available outside the US.

The UK launch has been underway for the past few months as the company has built up a UK team, to be headed by Channel 5’s head of digital media Jonathan Lewis.

Both the Vevo site and mobile apps will give viewers in the UK access to thousands of music videos and original content, such as interviews and live shows.

“It won’t be the same home page, everything will be filmed locally, although obviously the big US artists will be on there too,” he said. “We think we can put our weight behind new musicians, breaking their debuts in the market. We’ll create new content with them. We broke Jessie J and we’ve signed Tiny Tempah, who we’ll break next in the US. Fundamentally we’re a marketing platform for new artists.”