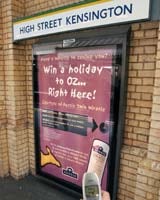 Viacom Outdoor is courting controversy with the launch of a network of Bluetooth-enabled poster sites on the London Underground which may be in breach of European Union regulations on electronic marketing.

The posters use technology developed by US company Wideray to send messages to passing Bluetooth handsets. Users are asked if they want to download further messages or content to their phones.

The first advertiser to sign up for the system is Channel 4, which plans to promote its broadband documentary channel, FourDocs. The message encourages viewers to make and send in their own four-minute documentaries.

But the UK’s Direct Marketing Association has repeatedly warned over the past 12 months that Bluetooth is covered by the Privacy and Electronic Communications Regulations. These require that marketers get permission from the device’s owner before they send any marketing message.

In September last year, mobile technology company Filter UK became involved in a similar dispute over the legality of its Bluecasting system. Filter claims that by only communicating with Bluetooth devices that are on and in receive mode, users are giving implicit consent.

But DMA legal and public affairs director James Milligan says: “We understand that you must have prior consent.” He adds that it is unclear whether sending a message asking for consent “is in itself an unsolicited marketing message”. Milligan says the DMA would welcome a ruling from the Information Commissioner’s office, which has jurisdiction on the issue.

Viacom Outdoor account manager Richard Simkins says: “We understand there is nothing illegal. The European guidelines don’t offer a full and complete answer on Bluetooth and they need to be updated.”