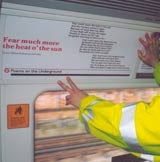 Greenpeace has been threatened with legal action by Viacom Outdoor following the pressure group’s decision to flypost the London Underground with poems attacking Esso and US President George Bush.

The posters, which were posted without Viacom’s permission, were an imitation of LU’s “Poems on the Underground” and were placed on the panels on the inside of trains. The poems were subverted versions of classics such as The Owl and the Pussycat, altered to carry the views of the Stop Esso campaign.

Viacom, which holds the contract to sell and control advertising on the Underground, says that LU, because of its public service status, has a policy of not carrying any political advertisements.

A Viacom spokeswoman says: “Not only is flyposting illegal, but it is dangerous to put the posters up when the trains are moving and not in their depots. Flyposting is something that we do not normally suffer from and we will be quick to stamp out any copycat activity.”

A spokesman for Greenpeace says: “We don’t regret what we have done, but London Underground threatened us with legal action if we didn’t stop the distribution.” He adds that Greenpeace will continue with its other guerrilla tactics such as sticker campaigns.

Stop Esso has been formed by a coalition of Greenpeace, Friends of the Earth and People &amp; Planet. The group claims that Esso’s parent company, Exxon Mobil, is fuelling war and global warming.