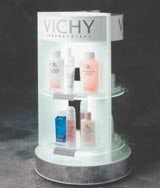 L’OrÃ©al’s dermatological skincare range Vichy has been delisted by major retailer Boots following a disagreement concerning its distribution through the chain.

Boots is understood to prefer to stock the brand on shelves, but Vichy would rather position the brand closer to behind-the-counter products such as LancÃ´me and Clarins.

Vichy is said to be reluctant to compromise on its international distribution strategy, which positions the brand as a specialist pharmacy product rather than a mass-market or premium skincare range.

An industry insider says: “Vichy does not want to go on a normal gondola with other brands. It wants to have its own space, but it’s a question of cost. Vichy has said it does not want to compromise in its international strategy. It was a successful brand on the shelves.”

The two parties are in talks to resolve the dispute, with both sides confident that an agreement can be made by the end of the year. Boots hopes to have the products back in store between January and April. Existing stock reserves are still being sold in some outlets.

Vichy marketing manager Neda Djokic says: “We have a very good relationship with Boots and both parties are working hard on various solutions.”