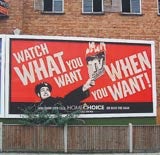 Video-on-demand company Video Networks is looking for a marketing director to spearhead a relaunch of its business next year.

Former NTL marketing director Jeremy Davies is acting as a marketing consultant for the company until it finds a suitable candidate.

Video Networks, a provider of broadband entertainment through its interactive TV, video-on-demand and internet services under the HomeChoice brand, underwent a major restructure last year. This resulted in the departure of more than 400 staff, including marketing director Mark Springett (MW September 19, 2002) and founder and chief executive Simon Hochhauser.

US investment company Digital Explosion has since provided additional investment in Video Networks in return for a controlling stake. New chief executive and chairman Roger Lynch, former chief executive and president of Chello, the broadband subsidiary of cable operator UPC, and chief operating officer Dean Hawkins, have also been appointed to run the company.

Video Networks, which has fewer than 10,000 subscribers in the London region, is planning to relaunch its HomeChoice service next year.

The new marketing director will oversee the relaunch and have responsibility for brand management, advertising strategy, media buying, promotional activity, PR and quantitative and qualitative research.