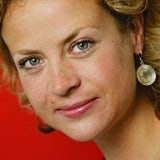 If you were lucky enough to get onto the summer music festival circuit last year, you may have noticed that festivals such as Latitude, Reading and Butserfest sold One-branded water. Even if music festivals aren’t your scene, it is likely you’ll soon hear of the brand – its filter jugs recently went on sale in Asda and other projects, such as recruitment services and broadband, are in the pipeline.

You might have also come across One-branded loo roll, condoms, chocolate raisins, nuts, eggs and vitamin drinks in the aisles of your local supermarket. Or you might be one of the 5 million people a year to have seen the ad featuring David Tennant, which was made for £290 and airs for free on all Virgin Atlantic flights.

Cooper says One’s products are aimed at the fashionable ethically-minded consumer who doesn’t like to boast about how much they’ve donated to charity, but might have Fairtrade and One goods visible in their homes. It’s almost like the UK version of Bono’s RED, which has global clout and big-name ambassadors. 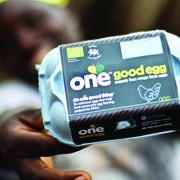 Cooper says that people understand the brand because the proposition is simple – “I do this, you get that”.

One chief operating officer Julie Devonshire adds that the brand is starting to define who its customers are.

Last year One enlisted the help of Red Bull and M&C Saatchi deputy creative director Tiger Savage at a brainstorming day to help decide what to do next and who its “aspirational group” might be.

Having big names on board as advisers, such as former Green & Black’s managing director Dominic Lowe, Red Bull UK managing director Nigel Trood and Birds Eye sales and board director Nick Johnson clearly helps, but if ever the phrase “punching above your weight” should be applied to a company, surely The One Foundation is it.