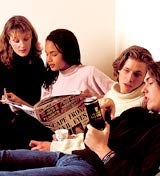 While Douglas Coupland’s novel Generation X referred to disillusioned “20-somethings”, the term is more generally applied to the generation below that – or at least those who are near to entering the rat race and whose attitudes are jaundiced towards the consumer society. It is not unreasonable to assume that the attitudes of this disillusioned group spawned the current wave of “anti-brand” feeling. But does this sub-group still exist, and if not, in what direction can we predict that we are heading based on the prevalent attitudes among the youth of today?

BMRB’s youth (sevento19-year-olds) version of its Target Group Index provides us with the ability to isolate attitude-based sub-groups and to track them over time. Taking 12to 17-year-olds as the base sub-group and applying a selection of attitude statements to segment the base yet further, we can isolate groups that are identifiably similar to those described a decade ago and compare them.

Statements were chosen that would reflect an individual’s current focus, future ambitions and feeling of self-worth. The survey examined attitudes to family, reading, schoolwork, travel, personal appearance, personality, to attending university and future career prospects and their worth.

As a means of segmentation, BMRB took agreement with three or fewer of the eight selected statements as placing a respondent in the “Generation X” category, while agreement with seven or more categorised them at the opposite end of the spectrum – “Generation Y”.

These so-called “generations” are in fact sub-categories of the overall age group. These sub-categories are necessary as they demonstrate how important it is not to make sweeping assumptions that people within an age group are similar enough to be treated the same for marketing purposes.

Basic comparisons between the analysed years (1993 and 2001) show that the number of those deemed as “Generation X” has fallen from 21 per cent to 15 per cent. The more focused, optimistic and self confident “Generation Y” group has grown from 17 per cent to 25 per cent. In terms of dominance, they are now in a stronger relative position than the “Xs” a decade ago.

Generation Y members are more likely to be found in London and the East Midlands (as was the case in 1993). They are least likely to live in the South-west where, like with East Anglia, the most recent incarnations of the Generation X teenagers are to be found in above average numbers.

At both the X and Y ends of the attitude spectrum, ownership of mobile phones is below average – although this is less marked among the former group. The Ys have a seven per cent below-average likelihood to have a television in their bedroom, while the Xs are on the average with a 74 per cent penetration level.

The relative seriousness of the Y group is reflected in the fact that they are significantly more likely than others in their age group to read a broadsheet newspaper and, unsurprisingly, Xs are diametrically opposite. But the latter are also below average for reading tabloid newspapers and appear to generally ignore that particular medium as a source of information.

Internet access fits a similar pattern, with Generation Y being some seven per cent above average in claimed likelihood to use it and their Generation X counterparts about ten per cent below average.

While the significant differences between attitudes to reading and studying are of no surprise, it is interesting to note that attitudes to religion are equally discriminatory. The Ys, as in 1993, are some 50 per cent above average for their age group to rate religion as “really important in life”. Again, as was the case almost a decade ago, the X sub-group demonstrates completely the opposite of that response and few aspects of life (or attitudes to it) seem to divide the groups more strongly.

As consumers, the groups are more difficult to prise apart. The two groups seem to behave similarly, despite the Ys claimed greater concern with the environment. A quarter of the Y group chose Nike the last time they bought a pair of trainers and about one in ten of them wear Levi’s as their latest jeans. While the penetration of Levi’s has halved compared with 1993, the approximately 50 per cent figure achieved by Coca-Cola as “favourite fizzy drink” remains the same.

While peer pressure means that the age group as a whole takes similar paths of brand choice, the existence of key attitudinal differences should encourage the marketer to be more aware of sub-groups within a generation.