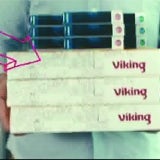 The business was formerly known as Viking Direct but has changed the name in a bid to make it more accessible to consumers as a retailer, not just business supplier.

Viking has also overhauled its website and introduced product reviews and recommendations and developed a mobile-enabled site. It has also introduced field and telephone sales channels to provide multiple touchpoints.

John O’Keeffe, Viking commercial director adds that Viking needed to update its proposition because it now competes with mainstream retailers such as Tesco and Amazon as well as traditional competitors in the stationery market such as Ryman and Staples.

“There is tremendous equity in the brand but it needed to be updated,” he says.

O’Keeffe adds that the relaunch is about recognising that the dynamics of business have changed and that many businesses are startups that exist in people’s homes rather than traditional b2b office environments.

Viking traditionally operated a mail order business but 40% of its orders are now online and within five years O’Keefe expects the majority will be through digital channels.

The 10 week national TV and Radio ad campaign, created by Gratterpalm and featuring the voice of BBC Radio 2 DJ and Marketing Week Engage Awards host Chris Evans, breaks on 16 May.