Launched today (11 May), the campaign was created by Adidas and its global communications partner, 180 Amsterdam and RIOT.

The 90-second ad features Messi and Villa, plus ex-France and Real Madrid star Zinedine Zidane driving a car ‘at speed’.

The ad uses Film Noir, graphic novel and Japanese anime techniques to build on last year’s ‘The Spark’ campaign, which featured Zidane and introduced Messi as ‘The Spark’. In the new ad, Villa takes the role ‘The Blaze’.

The ad launches online first to reach Adidas’s target audience, as well as promote the brand ahead of the 2010 FIFA World Cup in South Africa.

The campaign will then run on television globally.

It is backed by Adidas’s 50 Days of Fast campaign on www.facebook.com/adidasfootball, which features the likes of Kaka, De Rossi and Michael Ballack.

Facebook users also have the chance to take part in a ‘fast’ knowledge competition to win a pair of new F50’s signed by Messi.

Adidas is the official sponsor, supplier and licensee of the FIFA World Cup 2010 in South Africa and the 2014 event in Brazil.

Hot Diamonds, the designer jewellery brand, is poised to launch a multi-channel marketing campaign to support the brand’s repositioning as a consumer brand. 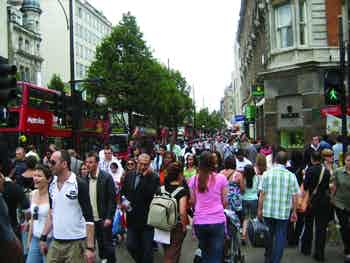 Pre-election uncertainty affected the high street in April as like for like sales fell 2.3% against the same month last year, according to the latest British Retail Consortium figures.