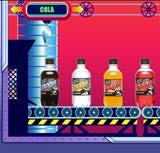 Nichols, which acquired the brand at the start of this year (MW January 27), is thought to be in talks with several agencies about the account, which has had no recorded above-the-line spend for more than five years.

It is thought that Nichols, which also owns Sunkist, wants to reinvigorate the brand’s advertising.

The Panda Pops brand was sold for &£5.5m by independent brewer Hall &amp; Woodhouse, which wanted to concentrate on its Badger beer brands and its pub estate.

The Panda Pops account has previously been held by McCann Erickson Bristol, while Nichols has used Cheetham Bell JWT for its drinks.

Panda Pops was among the “junk food” brands to come under attack in a survey supporting a campaign for a Children’s Food Bill conducted in June and July.

Food Magazine, which conducted the survey, warned that food brands including Nesquik, Kinder Surprise and Chupa Chups were using “manipulative marketing” techniques on their websites that were banned in print and broadcast advertising.