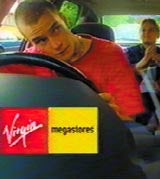 Virgin Megastores has agreed a one-year deal with MTV Networks UK to sponsor the show’s new Albums of the Week strand on its pop chart show, Hitlist UK.

The &£250,000 deal is MTV’s first cross-channel sponsorship – the three minute strand will run on the hour-long show every week but also as a stand-alone feature three times a day on its three channels, MTV UK &amp; Ireland, MTV Extra and MTV base.

The deal is the biggest music channel sponsorship Virgin Megastores has signed. It will have an Albums of the Week merchandising display in all of its 94 UK stores.

Virgin Megastores retail marketing manager Kerry Lee says: “Our association with a leading music TV channel will help to drive sales in stores and allow us to build opportunities around this partnership.”

MTV Network UK managing director Michiel Bakker says: “This is one of the most integrated cross-media sponsorships we have signed to date. Virgin Megastores’ commitment to the new Album of the Week venture is a clear statement about the power of MTV as a brand and as a marketing tool for the industry.”

The National Magazine Company is to enter the teen market with the launch of Cosmo Girl in the UK. It will be backed by a marketing campaign understood to be worth up to £4m. Tequila Payne Stracey has been appointed to handle advertising. Media will be bought through Initiative Media. It follows the disclosure that […]

Contract publishing’s future lies in the fusion of magazines and online opportunities, to create a package that enables two-way communication with established and new customers

Can Business AM capture the select band of industry magnates who will secure its survival? The answer may depend on its website