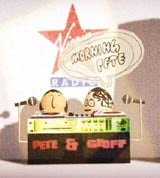 Virgin Radio breakfast duo Pete and Geoff are quitting the show after three years. It is understood that an announcement about their replacement is imminent.

Industry sources say they are surprised by the departure of the duo, who had brought stability to the breakfast slot, but add that Virgin is “very confident” about their replacement. Before Pete and Geoff took over the show, the station had struggled to find a suitable replacement for Chris Evans, who was sacked in 2002.

In the Rajar figures for the quarter ending March 27, the Virgin breakfast show had 1.2 million listeners, an increase of 90,000 in London. It also gained 100,000 listeners nationally, despite only being available on the AM or digital platforms outside the capital.

The pair, who previously presented Virgin’s drive-time show, will remain on air until the end of the year, before moving to a new time-slot. It is expected that they will be given an evening show.

The appointment of Marcus Rich, formerly EMAP Performance managing director, as the new head of EMAP Advertising has been met with a mixed response from media buyers and left many in the industry wondering exactly who he is. Several high-profile names, many with strong broadcast backgrounds, were linked with the job, but Rich, who has […]

FCBi has been appointed to handle Motorola’s digital and relationship marketing. Motorola has appointed Dutch agency 180 Amsterdam as the lead agency for its European advertising account (MW last week).

Nokia is hoping to hit back at critics who have branded its gaming phone N-Gage a flop by launching a range of multimedia phones based on the N-Gage platform. Smartphones, capable of playing N-Gage-compatible games, are expected to become available during the first half of next year. They are expected to be aimed at a […]