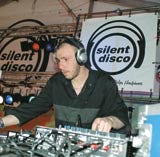 The Diary likes to relive its youth by getting down and grooving “wiv da kids”, as it believes to be the correct terminology. So while attending the T in the Park music festival, it was somewhat perturbed to see youths in a tent rhythmically moving about and waving their hands in the air in complete silence.

Perplexed, the Diary realised that said youngsters were dancing while wearing earphones that were playing the music of some of the day’s popular beat combos.

Virgin’s Silent Disco will no doubt be welcomed by noise abatement officers and may inspire a whole new generation of mime artists.

Magic, the EMAP-owned radio brand, is ramping up its investment in marketing and programming in a major assault aimed at increasing its share of audience and awareness of the brand among non-listeners. The move comes just weeks after Magic’s new managing director, Andria Vidler, joined the station. She is responsible for driving its development as […]

Contract publisher Publicis Blueprint has unveiled a new magazine from the Prudential to be delivered to 4 million customers three times a year. Three versions of Prudential Magazine – each with its own content – are being produced for different age ranges: the under-45s, the 45- to 69-year-olds and the over-69s. The magazine will include […]

Setanta Sports, the Irish-owned cable and digital sports television broadcaster, has invested in a major online push to boost take-up of its pay-per-view channels. The company – which operates seven digital pay-per-view channels in the UK and a subscription channel for UK expatriates in the US – will be running online advertising, an interactive viral […]