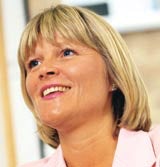 Roberts, who left the station last week by mutual agreement, is thought to have applied for the chief executive’s role.

It is not known whether Roberts has another job to go to or whether he will seek to remain in the radio industry. Industry insiders say that there were few prospects for Roberts at the station following the appointment of former Yahoo! managing director Hazlitt. She replaces John Pearson, who left the company at the beginning of April.

Roberts took over as sales director at the station in January 2003, following the departure of Mark Swift (MW January 9, 2003). He was part of the station’s launch team in 1993 and has held a number of positions in the sales team, including that of head of business development. He was made commercial development director in 2001.

SMG Television sales director Heather Hughes will take on Roberts’ responsibilities until a replacement is found. Virgin is in the early stages of recruitment.

Roberts’ departure coincides with the arrival of MediaCom radio manager Jo Daly as head of agency sales. She replaces Nicki Preece, who is leaving to go travelling.

The Wall Street Journal is to reformat its Asian and European editions in the ‘compact’ size on October 17. The new format will offer more colour advertising positions, including front-page spots for the first time.

Advertising spend in the UK is predicted to grow in real terms by almost five per cent this year and nearly four per cent in 2006, according to the European Advertising and Media Forecast Databook.

Consultancy What If! is linking up with three former directors of Phones4U to launch two new fast-food restaurant concepts, Bombay Junction and Mad About Pizza. Mad About Pizza, which hopes to rival Domino’s Pizza and Pizza Hut, is a delivery chain that will use Smart cars dressed up to look like giant cheese wedges. The […]