In addition, there will be a push in social media through the brand’s @visagoldenspaces handle and #contactlessBritain. Product placements will also appear on ITV where Visa Contactless devices will be seen on Emmerdale and Coronation Street.

Although there has been a growth in the use of contactless payment, research from The Logic Group found that 51% of respondents say security is more important than any other factor when paying, and two-thirds admitted that they were worried about having financial details stolen.

Penny Smith, head of regional marketing communications UK and Ireland says: “Until recently, there was an assumption that paying by contactless was something primarily done by younger debit card users. In reality, people of all ages across the UK are using Visa contactless to buy goods and services.”

Smith told Marketing Week the campaign hopes to give people who haven’t tried contactless the confidence to do so in the future, by placing transactions in familiar places on TV, such as the stores in popular soaps.

Smith told Marketing Week that with the roll out of contactless journeys on Transport for London’s (TfL) travel network and the introduction of mobile contactless services, Visa predicts that British people could make as much as 500 million contactless payments between September 2014 and December 2015.

In 2013, Visa Europe’s chief marketing officer, Mariano Dima told Marketing Week that contactless payments had reached “tipping point” but that the group would need to keep training and educating consumers about the payments.

While in 2013, a similar TV campaign was launched to encourage contactless payments, this year’s campaign will focus on digital, social and radio to catch people on their daily journeys to raise awareness.

Visa has become the latest sponsor to condemn FIFA’s response to recent corruption charges, following Coca-Cola’s move to protect its brand from the fallout by demanding more “forthright” communications from the beleaguered organisation.

Visa plans to partner with retailers to personalise cashback offers using its cardholders’ shopping data in a bid to generate revenue from the platform’s promise of clearer insight into the most effective areas to spend marketing budgets. 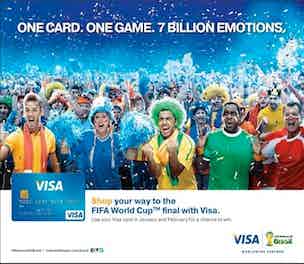 Visa’s generated the sharpest rise in instinctive positive feelings from consumers around the World Cup as the tournament’s top sponsors gained the edge over ambush brands in consumer awareness the longer the tournament it went on, according to a report.