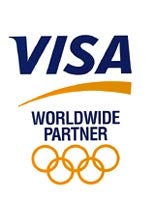 Spectators at this summer’s Olympic Games will be forced to pay for everything in cash unless they have a Visa card, following a major bust-up among sponsors.

Official supplier sponsor Westpac Bank has scrapped plans to open a branch at the Sydney Olympic site after Visa International refused to allow it to serve customers who do not have a Visa card.

Visa’s headline deal – it is part of the Olympic Programme or “TOP” sponsorships – makes it the official credit card of the Games, and it is using the agreement to enforce exclusivity.

The dispute means there will be no cashpoint terminals – other than those accepting Visa – inside the Olympic Park and other venues.

Before they enter, spectators without Visa will have to ensure they have enough cash to cover food or merchandise purchases.

A spokesman for the Sydney Organising Committee of the Olympic Games (SOCOG) says: “There will be a number of cashpoints, but they will only take Visa cards.”