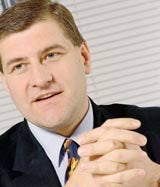 Visa EU has appointed Jon Prideaux as executive vice-president for marketing, following the promotion of Marc Temmerman to head the strategy department.

Prideaux will be responsible for the management of the Visa brand and the marketing of Visa’s product lines. He starts at the beginning of February and will report to the president of the region, Hans Van Der Velde. As executive vice-president for strategy, Temmerman will continue to report to Van Der Velde in his new role.

Prideaux has worked at Visa since 1989. In his most recent role, he was executive vice-president of Virtual Visa, the organisation’s internet division. In this position, he oversaw the development, management and marketing of all of Visa’s electronic and mobile commerce programmes. In addition, he led the roll-out of the EU “Verified by Visa” e-commerce security service.

Visa EU’s advertising account is handled by Saatchi &amp; Saatchi, while Mediaedge: CIA manages its media planning and buying. Saatchi won the account against J Walter Thompson after repitching for the business in 1998. It has handled the account for ten years.

Visa CEMEA, which covers central and Eastern Europe, the Middle East and Africa, is holding a pitch for its advertising account. Grey Worldwide and Lowe are the two shortlisted agencies. A decision is expected next month.

In November, Visa International said it would sponsor the Olympic Games for a further eight years until 2012.

Butcher’s has promoted brand manager Yetunde Ige to the newly created position of head of marketing, to oversee all the petfood company’s brands. Ige previously handled the marketing of Butcher’s dog food brands and oversaw the appointment of Clemmow Hornby Inge to the account last year (MW January 3, 2002). Ige, who has been at […]

Citigate Albert Frank has been reappointed to the Snappy Snaps business after a three-way pitch.

Governments’ and pollsters’ efforts to measure public satisfaction miss the point that while contentment is fleeting, moaning keeps Britain happy, says Iain Murray War is imminent, the stock market is falling like a spent rocket, recession lurks just around the corner, and the talk is of happiness. Last week, Cadbury earned the desired publicity dividend […]