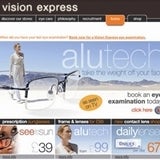 The retailer spent an estimated &£7m on advertising last year.

Seeaytch, based in the outskirts of Lausanne, is thought to have pitched against McCann Erickson and London integrated agency The Communications Agency. TCA has worked on several projects for Vision Express in the past.

Vision Express marketing manager Karen Williams, who was in charge of the advertising pitch, says the agency has been appointed for a one-off project: “Vision Express has no agency of record and has no plans to appoint one in the near future.”

Universal McCann will continue to handle media planning and buying for Vision Express.

Seeaytch’s Alutech campaign rolls out this week, promoting the ultra-light spectacles with the slogan “Alutech – they take the weight off your face”.

Vision Express has about 200 stores across the UK and the Republic of Ireland, and a turnover of approximately &£200m.

Last November, it announced plans for an aggressive expansion in the UK, with another 100 franchised stores to open over the next five years.

It recently launched its first customer magazine, titled Vision, to build its relationship with members of its Grand Advantage loyalty card scheme. The magazine, produced by customer publisher Square One, is intended to raise awareness of the retailer’s products and services.

Vision Express previously used Euro RSCG as its creative agency, which won the business in 2003.