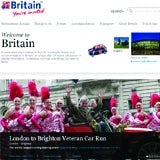 VisitBritain will create content for potential tourists that will be preloaded on the Samsung Galaxy Tab from December 2010.

A free Galaxy Tab bespoke app and “Best of Britain” widget will offer recommendations for trips, accommodation and entertainment and include imagery and maps. The same content will also be available for download on all Samsung smartphones.

The news comes shortly after VisitBritain found its government funding is to be cut by 34%. The tourism body is looking to develop more and stronger partnerships with the commercial sector.

Secretary of State for Media, Culture and Sport Jeremy Hunt, says: “The Government is investing around £50m in tourism marketing, and challenging industry to match that to create a £100m marketing fund to capitalise on 2012 and beyond. This partnership between VisitBritain and Samsung is a great example of what can be achieved when the public and private sectors come together.”

Samsung is the worldwide wireless communications partner of the Olympic Games. The company is positioning the Galaxy Tab to take on Apple’s iPad in the tablet market and has just signed a sponsorship deal for the forthcoming tour by band Take That.