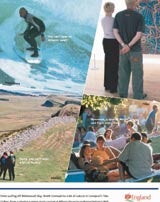 VisitBritain is to create its first roster of advertising agencies to handle marketing of the UK overseas and to promote England domestically.

The body, formerly called the British Tourist Authority, expects to appoint up to three agencies to handle the business, which will have a budget of &£6m a year. The contract will run for three years.

A spokeswoman says that a roster will give the organisation greater flexibility when planning campaigns. Agencies have previously been appointed on a project basis.

The appointments will be overseen by international marketing director Kenny Boyle, and marketing director for England Michael Bedingfield. Boyle was appointed in January (MW January 30) and is a former NTL and British Airways marketer, while Bedingfield was recruited in April from P&O Cruises (MW April 17).

Agencies would be expected to work with private sector stakeholders such as airlines, retailers and hotels, and the majority of campaigns will include a commercial offer and partner co-branding.