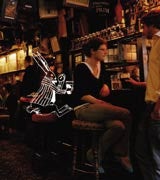 VisitLondon is launching an advertising campaign in Japan featuring a new brand icon that could be used to promote the capital across Asia.

The new character is a white rabbit loosely based on the Mad Hatter in Lewis Carroll’s Alice in Wonderland, and has been nicknamed Usagi – the Japanese word for rabbit. It will also be seen in London on the organisation’s television channel, London TV, from February 11.

The campaign and identity have been developed by Japanese agency Daiko, which is part of an alliance with Lowe – the agency that holds the VisitLondon creative account.

The campaign, which has the strapline “Wonder London”, sees the rabbit acting as a guide to London. Two trains on the Tokyo subway system will be decorated in a special livery during February as part of the campaign, which also features print and online work.

The Japanese version of the VisitLondon web page features an interactive map showing visitors a mixture of well-loved icons like Big Ben and lesser-known areas, such as Primrose Hill.

Zoe Shurgold, of VisitLondon, says that the organisation was hoping to appeal to younger females, and if the character proves popular it could be used in other Asian markets.