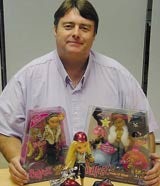 Vivid Imaginations and MGA Entertainment have agreed a joint venture to relaunch the Bratz dolls range in the UK. The deal will see a dedicated MGA division set up within Vivid Imaginations’ UK operation to produce and market Bratz and other new MGA brands.

Vivid Imaginations commercial director Neil Bandtock will head the new division, which will immediately begin previewing Bratz for the dolls’ release in January 2004.

MediaVest Manchester will handle media buying for Bratz in the UK, while the television advertisements will be by MGA Entertainment. The Bratz range will also include lifestyle products such as sports and electronic goods, bedroom furnishings and homeware. The target market is eightto 12-year-old girls.

Much of Vivid Imaginations’ previous UK success has come from its strong portfolio of boys’ characters, including Spider-Man and Hulk. Its leading girls’ ranges include Disney Princess and Sindy.

Vivid claims Bratz is the number one selling “fashion dolls” range worldwide and has achieved a 22 per cent market share in the US since the brand’s introduction in spring 2002. Bratz dolls were introduced in the UK last year by Bandai UK, which will continue to manage the Bratz and Li’â¢Bratz ranges until December.