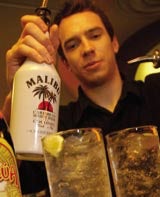 The decision spells good news for the agency, which this week has announced 11 redundancies as part of a global restructure of the Aegis operation. The reorganisation also affects sister agency Carat.

In the UK, Pernod Ricard spends &£7.4m and Allied Domecq spends more than &£5m, with the bulk spent on the Malibu brand. The deal between Pernod and Allied was cleared by the competition authorities last July.

MPG has worked on Pernod’s media business for several years following its merger with Havas’ Mediapolis, which previously held the business.

Allied Domecq moved its business to Publicis Groupe out of the now-defunct Cordiant three years ago (MW May 1, 2003), strengthening its relationship with Zenith, which has handled global media for Allied since the merger of Zenith Media and Optimedia in 2001. However, it is not clear whether the media review will be followed by an advertising pitch.