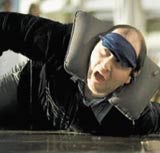 The company says there are no plans to review the advertising account, held by Delaney Lund Knox Warren, which was appointed in July 2000.

Teletext Holidays is launching a television channel next February on digital satellite. The programming will allow travel agents and tour operators to buy chunks of airtime on the channel.

Teletext Holidays launched a £6m TV and outdoor campaign in May, based on the idea customers shouldn’t make their friends jealous by mentioning how much they paid for their holidays. The slogan was: “Don’t ever let slip how little you paid for your Teletext holiday.”

Teletext launched on ITV and Channel 4 in January 1993. The company is owned by Daily Mail General Trust, which has stated it expects Teletext’s revenues for 2003 to be three per cent down on the figures for 2002.