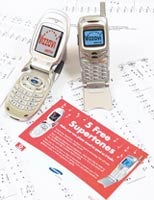 Mobile content provider Vizzavi is backing the launch of its advanced ringtone collection through a joint promotion with handset manufacturer Samsung.

Samsung has introduced two handsets that contain so-called “polyphonic” technology. This allows ringtones to be made up of more than two or three notes.

Vizzavi, jointly owned by Vodafone Group and Vivendi Universal, has developed a collection of ringtones made up of 16 notes. Its Polyphonic Supertones range of 50 tunes includes music from Mary J Blige and Kylie Minogue as well as television and film soundtracks.

The promotion set up with Samsung and Vodafone Stores offers purchasers of the Samsung T100 or N600 a box containing a scratchcard which reveals a PIN number allowing download of five free Supertones via WAP technology. The promotion also includes the chance to win a carnival holiday in Rio or New Orleans. The offer begins this week and is being promoted with point of purchase in Vodafone Stores.

The Supertones collection will grow by 15 tunes a week. Ringtones cost £3 each to download.

Vizzavi denies speculation that it is up for sale or to be folded into Vodafone’s global products and services division.

The company was set up in July 2000 and sponsored the television show Pop Idol.

Bhs owner Philip Green provides marketers with a salutary lesson. It is not one of success leading to bonuses of &£180m, rather that marketing is as much about service and quality of product as communication and brand promise. In an age when the marketing community is obsessed with being able to cut through communications clutter […]

The reshuffle in the UK spirits market has seen brands, such as Drambuie, handed to new distributors. This will mean more marketing resources for big brands, while the smaller ones have to jockey for niches.

The Diary loves looking at big, heavy birds. No, this isn’t a story about Alison on Big Brother 3 – it’s about the new sculpture at The Famous Grouse’s visitor centre in Crief, Scotland. The company believes the 18-foot grouse, which weighs half a tonne, is the largest grouse sculpture in the world. Given that […]