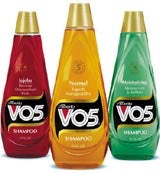 Alberto-Culver is to revamp its flagship VO5 haircare range, with an estimated £10m marketing and advertising spend.

It is the first time the brand has been supported by such a largescale budget, according to industry insiders.

The revamp, which will include new packaging and new VO5 shampoo and conditioner fragrances, will be available on the shelves in July. A new set of television ads will be created by Euro RSCG. The agency was awarded Alberto-Culver’s $40m (£28m) global advertising account without a pitch two years ago, after the beauty and haircare company parted company with M&C Saatchi. Media buying is by Carat.

VO5 has a value market share of five per cent, which is behind Lever Fabergé’s recently launched Dove haircare (6.6 per cent) and Procter &amp; Gamble’s Pantene (9.3 per cent), according to a recent IR report on the haircare market.

Last year, the VO5 range was colour-coded into seven categories with a rating system indicating the level of their hold. The range includes styling sprays, mousses, gel sprays and a styling crÃÂ¨me.

The Alberto-Culver haircare range also includes the upmarket Andrew Collinge Salon Solutions. The company also owns the St Ives skincare range, which it bought in 1996. The acquisition from St Ives Laboratories cost $110m (£76m) and was Alberto-Culver’s largest ever.