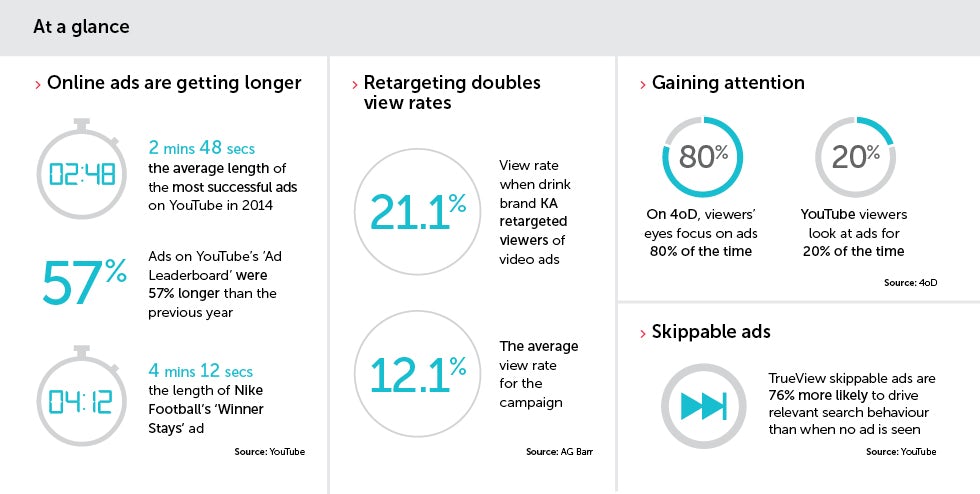 The online video advertising options available to brands today are vast and varied, while the level of targeting and interactivity means advertisers have the opportunity to connect with viewers at a much deeper level than ever before.

While many brands advertise across both broadcasters’ video on demand (VoD) services, such as Channel 4’s 4oD and ITV Player, and video sharing networks like YouTube, those that do so most effectively set out clear objectives for each platform and measure videos’ performance across platforms and screens.

Gawain Owen of Nestle marketing communications says: “With the proliferation of devices that enables users to watch content wherever they are, it is important that as a brand we are able to follow the audiences where they are watching. This trend will continue as the internet becomes further embedded into society. Currently we are very comfortable with the blend we have which is engaging on broadcast TV, YouTube and big named sites, which are run through video platform TubeMogul to help build reach and frequency.”

AG Barr’s Hollie Kozakiewicz, brand manager for Caribbean-style soft drink KA, suggests the biggest difference between YouTube and broadcasters’ VoD is scale, both in terms of reach – the former racks up more than 1 billion unique users a month – and content.

“The volume of content on YouTube makes it an experience much more tailored to the user,” she says. “YouTube is the second biggest search engine behind Google itself and the PPC-style targeting on offer through the TrueView skippable ad platform allows brands to position themselves around only the most relevant content while also delivering strong scale.”

Nestle’s Owen says that on VoD sites, meanwhile, it is important to try to create an engaging ad in terms of interactivity. “Quite often our ads run as one of several, so making sure we achieve cut-through with our audience is really important. With shorter-form content it is very unlikely that there will ever be more than one ad run so as an advertiser we know we will get 100% share of voice,” he adds.

Channel 4’s digital and creative lead David Amodio says that while the majority of ads on 4oD are versions of content made for TV, the fact they tend to be clickable adds an additional layer of interactivity. Plus it has seen “dramatic growth in the number of advertisers wanting to create bespoke ad copy specifically for VoD” since launching its suite of interactive VoD advertising products in 2011, he says.

“By taking existing video copy and adding an interactive layer we see engagement levels grow up to 300%,” he claims.

4oD’s Ad Elect feature allows advertisers to give users the option to choose different content, while the Ad Social function means it can be shared by adding Twitter or Facebook prompts. Users can also watch longer pieces of content with Ad Extend, and the broadcaster has recently enabled advertisers to offer personalised messaging to viewers using first party data from its 11m registered users.

“It’s amazing just how powerful the use of someone’s name can be in driving engagement,” says Amodio.

AG Barr chose YouTube for a recent KA campaign as it was keen to engage “a niche audience of black British youth” who were interested in getting into the music industry, Kozakiewicz says. “Engaging users in the YouTube environment is all about sharing their interests, so our targeting was strictly focussed around urban music content.”

KA enlisted creative agency Multiply to develop a series of 15-second skippable ads featuring “inspiring music influencers” that were placed ahead of music videos within the current UK rap and grime music scene.

The campaign achieved 569,663 views on YouTube, and when retargeting people who had already viewed the content with an additional ad the view rate increased to 21.1%. This compares to the campaign average of 12.1% and an industry average of 10%.

“Older advertising methods used to disrupt or intrude on the user’s experience [which means the effect on the audience could be the opposite of that intended]. By giving the user choice and only paying for completed views you guarantee minimal wastage on your media investment and also ensure your brand is viewed in a positive light,” she adds.

While KA opted for ads of just 15 seconds in length, the average duration of content on YouTube’s 2014 leaderboard of the most successful ads was 2.8 minutes, and the ads on the list were 57% longer than those that featured the previous year.

Derek Scobie, head of YouTube Propositions, northern and central Europe, says: “Gone are the days when ads needed to be 30 or 60 seconds long. Ads can be as long as the story they have to tell will hold the consumer’s attention.”

Nike Football’s ‘Winner Says’ ad, which racked up over 100 million views, earning the number two spot on the UK leaderboard and first place in the US, was four minutes and 12 seconds long.

“[People watched it] because it was highly relevant, topical and had something to say about the World Cup that audiences wanted to hear,” he says. “It wasn’t limited to the constraints of the past.”

Because brands only pay for TrueView in-stream ads if viewers watch for at least 30-seconds, or to completion if the duration is shorter, Nestle’s Owen suggests brands could effectively serve content for free.

“If you can get your brand message across in the first five seconds and then convince someone to skip before 30 seconds it is free traffic,” he points out.

Owen does believe that the length of ads should be optimised for each platform, however.

“TrueView is great for content over 30 seconds, while 15-second ads tend to get greater completion rates when compared to 30-second TV catch-up ads across the wider web,” he says.

Using eye-tracking glasses and electro-dermal response patches to detect neurological activity, the study found that on the 4oD platform viewers’ eyes were locked onto the ads for 80% of the time, with an average of 73% for all broadcast VoD ads.

Ellison concluded that this is because when viewers consume content in broadcast players, the ads tend to be relevant to the content and people tend to watch videos at full-screen size, meaning that there is little opportunity for attention to stray elsewhere while waiting for a programme to resume.

Channel 4’s Amodio claims: “The opposite could be found on social media, where the ads appeared to agitate viewers who chose avoidance techniques and looked to plan their next piece of content rather than consume the ad.”

YouTube viewers spent an average of just 20% of their time looking at the actual ad in the player, according to the research. The rest of the time they were either looking away from the screen or at other menu areas.

However, as part of its YouTube Insights series, the video sharing site carried out some research of its own which argues that TrueView skippable ads are 76% more likely to drive subsequent relevant search behaviour compared to people that are not exposed to an ad, while its 2012 Think Insights study finds that eight out of 10 viewers prefer TrueView ads to standard in-stream ads, and nine out of 10 think they create a better video viewing environment. Both sets of research clearly have a vested interest, however.

When it comes to content, YouTube’s Scobie says repurposing TV spots can work, but he stresses that brands should at least make some edits, particularly if using skippable ads, to ensure they get the best response from viewers.

“In the past, advertising was developed to take viewers through a story before a big reveal at the end but with TrueView brands need to hook the audience much earlier on in the creative. As users can skip after five seconds it is really important to establish the brand and relevant message in the first few seconds,” he advises.

YouTube is also being used by brands to test the shareability and engagement rate of new video content, according to Nestle’s Owen, which works with video ad platform TubeMogul to deliver content. “Through technology partners we can see the second-by-second drop off rate. When these results are back we meet with our agencies to discuss how we can improve so when we launch [our video] it is as strong as it can be,” he says.

Nestle commissioned five pieces of creative content for its Rolo brand using the MoFilm hub of filmmakers to run on YouTube and had selected a winner ahead of putting the content live but was forced to re-evaluate its decision.

“The public quickly decided for us which of the pieces of content was the best-performing, which was at odds with our selection process,” he says. “Traditionally we would have backed the film we judged to be the best, but this time the consumer engagement figures told us something different.”

What’s the recipe for a great online video campaign? There are four key ingredients: a teaser, an interactive experience, the video spot itself, and a clear campaign objective.

Remember that real people are normally trying to get on with something and that your ad is interruptive for them. It’s important to respect that. With in-stream video, provide an option to skip the ad while with other formats best practice is to use a shorter clip of the full spot, autoplay but sound off, and design signals to show there is more content to explore. Because digital offers more interactivity than video alone the teaser is a light touch invitation to engage with your brand further while allowing those that are not interested to carry on their journey without disruption.

Ensure that the teaser transitions gently to a full screen brand experience where the video is the dominant feature. To hold users attention offer a gallery of videos that autoplay sequentially, use common design elements to signal exactly what the ad can do, and make any interactive features authentic to the brand. And when the user is done? Make sure you drop them back where they started in order to minimise disruption.

One paint manufacturer achieved interaction rates 50% above their industry benchmark by using these ingredients. Once engaged in the full screen experience users could repaint the brand canvas in various bright colours while watching the video. This was very much on brand, clearly signalled in the creative, and linked to the concept of the video itself.

Unlike TV, online interactive video can do three things: capture attention, pique curiosity, and then satisfy that urge to know more. Our paint example featured real people looking inspired which in turn drew users in to understand more. Or like Volvo Trucks, who appealed to different emotion in their video spot by combining celebrity (Jean-Claude Van Damme), humour (doing the splits), and information (between two trucks reversing with precision).

Real people are frenetically busy and with many distractions. Online video campaigns give advertisers the opportunity to earn the right for people to spend some of their precious time with their brands. 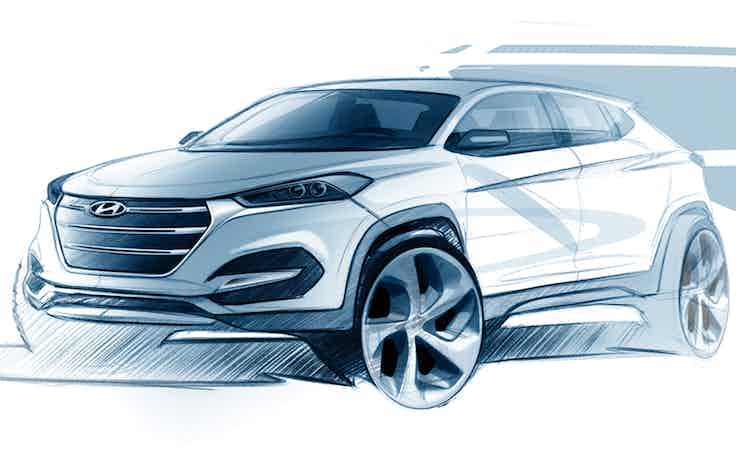 Facebook posts that include video now have a wider reach than photos, according to Socialbakers research.