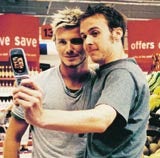 Vodafone has confirmed that its image rights deal with footballer David Beckham has come to an end. The company says the contract has been ended “by mutual consent”.

The &£1m-a-year sponsorship with the Real Madrid and England footballer to promote the mobile phone brand around the world was initially a two-year deal, first signed in 2002. The sponsorship was renewed in August 2004, despite Beckham’s alleged affair with Rebecca Loos.

While Vodafone extended the contract last year, speculation is rife that a relationship with Loos and her disclosure of allegedly sexually explicit texts between herself and Beckham are behind the decision to part company. Vodafone denies this, saying that both parties have moved on.

The Vodafone-Beckham deal saw the footballer promote the launch of the mobile phone company’s third-generation services, as well as advertising being run across the globe.

Vodafone has not named a replacement as global brand ambassador.

The mobile phone company has strong links with sport and in particular football. It recently reaffirmed its commitment to English cricket as sponsor of the English cricket team and is the shirt sponsor for Manchester United.

Manchester United fans are continuing their assault on sponsors (MW May 25) calling for supporters to boycott the companies. Outside Vodafone’s AGM yesterday (Tuesday) protesters held up posters saying “Hang up on Malcolm Glazer”.

However, Vodafone says it sees no reason why Glazer’s takeover of the club should affect its image.