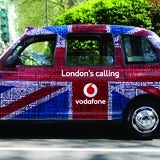 Taxi users can pay by texting the license number to an allocated code, and it will be charged to their Vodafone bill.

The scheme is part of a £10m campaign by Vodafone demonstrating its commitment to a creating a strong London network. Under CEO Guy Laurence, Vodafone has been bolstering its network in the capital, which has been pressured under the growth of smartphones.

Meanwhile, Samsung and Visa will partner for a mobile-payments service using near-field communications technology ahead of the London 2012 Olympics.

Earlier this year, Samsung announced it would launch an Olympic-branded handset with a Visa payment app embedded, which will let users pay for items directly from their phones. Visa mobile payment app users can select ’pay’ and hold the phone in front of a compatible contactless reader to make a purchase.