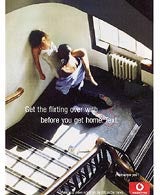 Vodafone has had its knuckles rapped by the Advertising Standards Authority (ASA) for using sexually gratuitous images in its press ads, following 19 complaints from the public.

The ads, created by WCRS, use the tagline: “Get the flirting over with before you get home. Text.” One ad shows a couple on a stairwell, with the woman pressed against the wall with one leg over the shoulder of a man who is kneeling between her legs.

The ASA in its latest report says that the images are unsuitable for children and are likely to cause serious or widespread offence. The mobile phone company has been asked not to repeat the approach in its advertising.

Retailer Boots has complained to the ASA, challenging claims made by health products company Healthspan in national press ads that it produces the purest cod liver oil in the UK.

The ASA has upheld the complaint and asked Healthspan to amend the claim with help from the Committee of Advertising Practice’s (CAP) copy advice team. The advertising watchdog has also asked the advertiser to amend its second ad, which says: “Now it’s official, Healthspan Cod Liver Oil is the bestÂ HM Government Food Standards Agency.” The ASA has ruled that the ad implies an endorsement by the Food Standards Agency, which is misleading.

Healthspan’s claim that “every company that sells cod liver oil capsules in the list alongside makes them out of gelatin” was also ruled misleading, as not all the companies listed used gelatin in each of their products.