The ad shows the two Formula 1 drivers trying to build their own car without their team, and using mobile handsets to phone their support team and take photographs.

It ends with the tagline: “Vodafone McLaren Mercedes drivers depend on their team; their team depends on our network.”

The ad, created by BBH, is the mobile operator’s latest campaign as part of its ongoing “Power to You” brand positioning.

Vodafone, which first unveiled the positioning in September 2009, is hoping the mareting approach will boost its brand credentials and attract younger consumers in the underperforming UK market.

Vodafone and the McLaren Mercedes Formula 1 team agreed a long-term deal for the mobile phone company to become the team’s title sponsor in 2005. The deal has been ongoing since 2007, when Vodafone ended its sponsorship of rival team Ferrari. 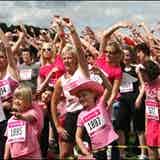 Cancer Research UK has unveiled a new agency line up to help drive recruitment and engagement with its supporters.