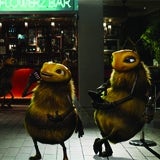 Vodafone claims the plans offer “great value to customers,” as the more they top up, “the more Vodafone gives.”

The company, with 10 million pay as you go customers, ranks behind the other big players in the market. Everything Everywhere, the company behind Orange and T-Mobile, has 15.6 million and O2 has 11.5 million.

There are 50 million pay as you go phones in the UK.

A print marketing campaign featuring animated ’bee’ characters launches this week, while a TV campaign will break before Christmas in a bid to exploit the sales opportunities the festive period brings.

A company spokesman says that the Freebees campaign and the focus on pay as you go customers will continue well into 2011.