Miall sold the free weekly magazine to UTV Media, owner of Talksport, in June last year. After the French parent company of the publication went into administration

He is no tasked with attracting major sponsors to bring on board new teams for the Volvo Ocean Race and to develop supplier partnerships.

The race is based in Alicante. The inaugural event too0k place in 1973 and the competition was known as the Whitbread Round The World Race until 2001, when Volvo took over the naming rights.

The latest findings from the fast.MAP/DMA Marketing-GAP Tracking Study (MW 14 January) come as no surprise to those who remember the basics. 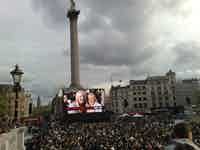 T-Mobile spent 2009 gathering consumers together in public spaces for “spontaneous” dancing and mass karaoke sessions. But despite this high-profile marketing, the news that it would merge with fellow mobile brand Orange into a super-network has raised questions over whether the T-Mobile name will continue to exist in the long term.