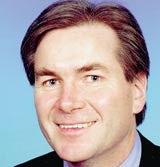 Keaney, who was a former sales and marketing director and managing director of Volvo Car UK, will continue to be based at the company’s headquarters at Gothenburg in Sweden, where he has been based since last August (MW August 29, 2002).

He will replace Dieter Laxy, who is taking retirement. Laxy joined Volvo from BMW in 1999, after a brief term as head of marketing in the UK for both BMW and Rover, which was then part of BMW.

Keaney, who has been with Volvo for 13 years, becomes a member of the management board of Volvo and will report to Hans-Olav Olsson, who is the company’s president and chief executive.

At the end of last year Volvo promoted Simon Munn to sales and marketing director across Eire and the UK, Belgium and the Netherlands. He moved from the position of regional communications manager, responsible for marketing and advertising strategy (MW October 10, 2002).

BBC director of marketing and communications Andy Duncan claims that 500,000 Freeview adapters have been sold since its launch and that, according to BARB, more than 1.4 million homes have Freeview, a figure greater than that obtained by ITV Digital…

Mediaedge:CIA chief executive Fiona McAnena is stepping down from her post at the WPP-owned media agency to join WPP Group’s information, insight and consultancy division, Kantar. Rob Norman, chief executive of Mediaedge:CIA subsidiary Outrider, is to take the reins at the agency as chairman. At the same time, former MindShare chief executive Mandy Pooler is […]