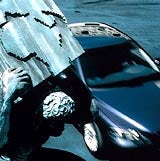 Volvo is launching a television ad campaign for its S60 model. It marks Amsterdam-based MVBMS Fuel Europe’s first work for the car company since it won the European business last year. The car manufacturer’s pan-European campaign aims to portray the marque’s new ‘sexier’ and ‘sportier’ image with the S60, which was launched via the Internet in the US last autumn. The campaign, which breaks in the UK this week, will encompass all media – including outdoor, direct mail and interactive – throughout the spring. It will centre around the tagline ‘revolvolution’, which will form an integral part of future campaigns for the company. MVBMS chief executive says: ‘This new campaign is designed to demonstrate the powerful new direction of Volvo. By placing the sexy, sporty S60 against a boxy world, we send the signal that boxy cars are a thing of the past.’