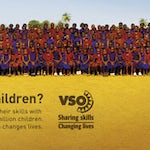 The integrated campaign will roll out later this month and has been created by integrated agency Kitcatt Nohr Alexander Shaw.

VSO hopes that it will increase awareness of its work and drive enquiries from potential volunteers, donors or people who wish to get involved with the charity in some way including lobbying or fundraising.

The campaign aims to demonstrate the lasting impact that VSO volunteers can have on the lives of people in developing countries. National press ads, which features an image of a large group of school children, carries the headline “How many volunteers does it take to teach a million children?”, while the body copy goes on to explain how two teachers who volunteered in Ethiopia in 2003 shared their skills with 2,500 teacher trainers, who in turn taught 11,000 teachers, who have already taught more than 1 million children.

Campaign activity also includes online advertising on sites like The Guardian and Times Online. Media was planned and bought by Arena BLM.

Laura Solomon, head of creative services at VSO UK, says: “We want people to understand that by putting the right skills into the right environments, VSO’s work not only helps in the short term but allows communities to build up their own skill base and become stronger in the long term.”

Marc Nohr, managing partner at Kitcatt Nohr Alexander Shaw, adds: “This campaign demonstrates VSO’s uniqueness as an organisation, and shows how getting involved with their work can have a long-lasting impact on people’s lives in developing countries. We hope it will increase people’s understanding of the charity and generate plenty of enquiries.”

The Co-operative Group is to merge its existing buying and marketing teams in its food business under a single leadership and axe the role of director of food marketing.