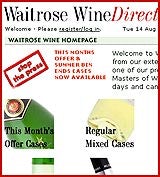 Waitrose is looking for an agency to handle the first below-the-line work for its Wines Direct arm.

A number of undisclosed creative agencies, believed to include Black Cat, Geronimo and Banks Hoggins O’Shea/FCB – which handles advertising across the Waitrose group – pitched for the business last week.

The creative work will initially include press and poster advertising only. Media buying will be handled by Banks Hoggins.

A spokesman for the supermarket chain says it decided to launch a campaign for Wines Direct following its first foray into television advertising in May this year, with a £2.5m campaign created by Banks Hoggins.

“Because of the success of the TV and press campaign, Waitrose wants to make sure that it is making the most of advertising from a strategic perspective,” he says.

The Wines Direct arm was launched in 1995 following Waitrose’s acquisition of Findlater Mackie Todd, a home-delivery service for wines. It now forms part of the supermarket’s broader home-shopping service and can be accessed online or through a freephone number.

The launch of online shopping has allowed the supermarket chain to extend its reach outside the South of England. The company’s own figures show that more than 60 per cent of its online wine shoppers are from outside its geographical catchment area.

Marketing is infuriatingly hard to articulate, and apt to languish unnoticed and unappreciated by those in harder-edged corporate roles but can make the difference between a corporation and its brands hobbling along the ground or soaring up into the stratosphere.