The supermarket is also launchings its first major advertising push for its MyWaitrose loyalty scheme to celebrates attracting more than one million members.

The upmarket supermarket says it is “breaking with convention” and eschewing a big budget Christmas ad so that it can donate more to 1,700 charities local to its stores.
Celebrity chefs Heston Blumenthal and Delia Smith, who have fronted Waitrose advertising since 2010, appear in an empty studio location next to the Waitrose community collection box usually found in stores.

They explain that Waitrose has decided against a “fancy TV advert” ad is instead donating £1m to good causes through its green token Community Matters scheme. Blumenthal and Smith have also donated their fee.

The initiative gives customers the opportunity to influence where Waitrose donates funds by choosing which three local good causes to support. In-store, customers are given a green token when they pay at the checkout while online customers can chose between a number of national charities to donate to.

It is the first time the supermarket has promoted its charity initiative in advertising. Waitrose is also encouraging customers to donate items to a local food bank, in recognition that more families in the UK are turning to food banks because they can’t afford to feed their families.

Rupert Thomas, Waitrose marketing director, says: “At what is a difficult time for many people across Britain, we feel that Christmas is the right time to give more back to good causes in the communities we serve. There  are no snow machines, no festive glitter, just an echoey studio stripped bare of Christmas trimmings. By cutting back on our production costs we can channel an additional £1m to local good causes.”

The campaign, which uses the strapline ‘Giving more this Christmas’, will  air on YouTube today (2 November) and break on TV tomorrow (3 November) during the X-Factor.

Waitrose is also launching a major TV, press and DM push for its MyWaitrose loyalty scheme, offering a range of benefits such as free tea and cake in-store and newspaper discounts to improve the shopping experience.

MyWaitrose members can also claim 10 per cent discount on wine between 7 and 13 November and will receive £25 worth of vouchers to spend in January if they spend more than £50 four times before 9 December.

Thomas says: “The success of the MyWaitrose card demonstrates that customers perceive it to be of real value. The benefits members can enjoy every day, combined with personalised offers and experiences, set us apart in the crowded loyalty card market where accumulating points when you spend is the norm.” 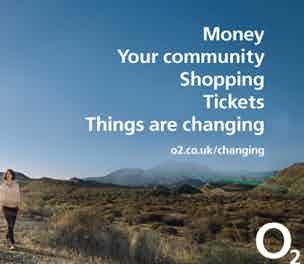 O2 is building a “user experience design centre of excellence”, inspired by brands such as Apple and BMW, as it looks to better integrate its array of products and services.

In recent months, the organisation formerly known as the Prostate Cancer Charity has rebranded itself as a highly politicised action group.