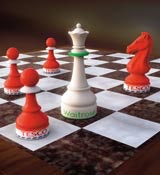 Waitrose would appear to have most to gain from the OFT’s referral of the big four grocers to the Competition Commission, but can it remain faithful to its unique proposition while seeing off the threat from a newly rejuvenated ‘mass-market upmarket’ Sainsbury’s? By Ian McCawley

If the Office of Fair Trading’s (OFT) decision to refer issues of restrictive practice in the UK grocery market to the Competition Commission has sounded alarm bells at the big four supermarkets, it could well set tills ringing among smaller food retailers, led by Waitrose.

The ensuing two-year inquiry is set to cost Tesco, Asda, Sainsbury’s and Morrisons a total of &£40m in advisers’ fees. But Waitrose has been quietly beavering away in the high street, snaffling Safeway and Somerfield stores, and expanding into previously unexplored territory in the North of the country. In the summer, the John Lewis Partnership (JLP)-owned chain is set to open its first outlets in Scotland. With its distinctive offer, analysts believe Waitrose could therefore be in a position of strength.

Waitrose is well placed to seize some of the ground that could be yielded if the Commission decides the major players must give up some of their plots. Tesco, which insisted this week it is “the friend of the consumer”, reportedly holds 58% of the total undeveloped landbank identified by the OFT. Meanwhile, Waitrose has just over 170 outlets nationwide, and although it seems to have been operating under the radar of the watchdogs, marketing director Christian Cull claims/ “There is a greater demand for us than we’re able to provide at the moment.”

This demand, and healthy financial figures announced last week, paint a rosy picture at Waitrose, which is poised to overtake Somerfield as the largest grocer outside the top four, according to TNS. It gained kudos for recently becoming the first supermarket to publicly back the Food Standards Agency’s preferred “traffic lights” food ingredient system. It was also voted the UK’s favourite shop in a Which? poll, ahead of John Lewis, while a Verdict survey merely reversed those positions.

Adding value to the community

Cull is upbeat about the OFT decision, especially as Waitrose is perceived to have problems claiming new land ahead of its bigger rivals owing to the planning laws. It has added 30 branches in two years, but mainly through acquisition. He also doesn’t accept that Waitrose’s growth is viewed with trepidation by independents: “We work well as part of the high street, adding value by being at the heart of the community.”

Edward Garner, director of research at TNS Worldpanel, agrees: “It doesn’t overtly bash independents over the head on price. Some, in fact, might be pleased to have Waitrose in their vicinity, so they can gear up to its level of service.”

Customer service is a key offering for Waitrose, highlighted in the chain’s updated ad strategy, developed by Miles Calcraft Briginshaw Duffy (MW last week). The latest television campaign still features premium food, but for the first time includes “partners” – JLP’s name for its employees who effectively own the company and have a say in decision-making. Cull explains: “We are evolving the ad strategy, rather than changing it. Our partners have genuine pride in running their own business, and customers recognise they provide great service. There’s certainly room for those values in a fiercely competitive retail world, and we wanted to bring that alive.”

Cull says that the group has no intention of eroding its values as it steadily builds its empire, claiming the market could sustain a “7% or 8% share” player. Currently, Waitrose and Somerfield have just under 4% share each, while Morrisons is the next biggest with 11.2%. Cull states: “Our grand plan is to grow at the right rate but carry on offering quality across the supply chain. With our proposition, if you double in size you can’t suddenly expect farmers to turn out twice as much beef overnight.”

Yet analysts say Waitrose may find it difficult to stay faithful to JLP’s unique ethos and structure as it grows. Some observers believe it is for this reason that the company is circumspect in selecting locations for new stores. Garner states: “As it expands, it is going to pick out affluent areas and be careful about what acquisitions it makes. Waitrose won’t stick itself in the darkest corner of Bradford.”

Other experts cite potential pricing strategy problems if Waitrose expands beyond its traditional affluent catchment areas. But Cull points out that more than 50% of its sales now come from outside the South. He argues: “It’s a big myth that we only serve southern counties, with some people speaking of us having an ‘it’s alright for some’ and ‘you get what you pay for’ attitude. And it is patronising in the extreme to suggest certain areas of the country have a different attitude towards food.”

Indeed, the well-documented rise of “foodies” has created a bigger market for premium food ranges, something of a speciality at Waitrose. But the public’s willingness to shell out more on quality produce could prove the chain’s Achilles’ heel. Garner observes: “It may have a problem with Sainsbury’s. Traditionally, grocers have been upmarket or discount, but [Sainsbury’s chief executive] Justin King says there is nothing wrong with being ‘mass-market upmarket’, which may tread on Waitrose’s territory.”

Paul Cousins, a director of Catalyst Marketing Consultants, adds: “Sainsbury’s finally understands what it’s about and has come up with a new strategic direction and a similar offer: they are after more foodies. Sainsbury’s is more akin to Waitrose than other supermarkets, and is more likely to take share from it.”

Aware of the threat to its proposition from the likes of Marks &amp; Spencer and Sainsbury’s, Waitrose managing director Steven Esom earlier this year announced an investment in fresh food which will result in up to 20% more sales space for the range. And with Waitrose and John Lewis doing well in the eyes of the City and consumers alike, Cull claims with some confidence: “The Partnership’s time has come.”