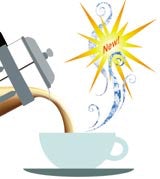 The legend goes that coffee was discovered by a goat-herder called Kaldi in Ethiopia around 300AD. Apparently, he noticed his goats were more energetic after eating red berries from a tree, and he experienced the same effect when he ate them. He gave the berries to local monks to help them stay awake during night-time prayers and they discovered that preparing a drink using roasted berries had the same result, and tasted much better.

Knowledge like this – okay, let’s call it trivia – is an essential weapon in the field marketer’s armoury, especially when trying to convince consumers to sample and buy a new coffee maker.

When Douwe Egberts and Philips teamed up to launch the complicated-sounding Philips Senseo Coffee Pod System, they needed to know the in-store demonstration team was educated enough to answer any question a consumer might throw at them.

The manufacturers were funding 1,300 retail demonstration days in 27 weeks. It was vital that the in-store activity generated sales while the above-the-line television advertising was raising brand awareness.

a taste of the real thing

“Not many people buy expensive coffee machines and getting this system into the market early was vital. We had to convince people it was easy to use and the coffee tasted great,” says Bruce Burnett, managing director of i2i Face to Face Marketing.

The results were certainly impressive. More than 11,500 coffee machines were sold during the sampling period, with a retail value of almost &£600,000. More than 222,000 coffee samples were given away and over the Christmas period, the system accounted for 56 per cent of all filter coffee machines sold in the UK.

By getting a field marketing company involved in the launch process, Douwe Egberts and Philips were able to get their new product to market much quicker, generate healthy early sales, achieve the distribution levels they needed and ensure there was enough stock on the shelves.

However, agencies claim that, in too many cases, they are not being asked for their input early enough. “If we are involved at the very beginning, when a campaign is being planned, we can help to fine-tune some of the ideas the trade marketing team is keen to see. Often, we are aware of competitor activity happening at the same time as the client’s launch or we can recommend a better selection of stores in which to carry out the activity. Our contribution can even help ensure a new product is actually listed in store,” says LIME managing director Tanya Sergant.

Field marketers argue that because they are in regular contact throughout the year with the decision-makers within the multiples and thousands of independent stores, they know who to talk to and, crucially, when to approach them to make sure a product launch runs smoothly.

Agencies are adamant they should be employed before any above-the-line activity kicks in. They want to be involved at least six weeks before any TV advertising airs. If they were, their representatives would spend the first three weeks talking to store buyers and another three ensuring all in-store promotions and displays are ready to be installed and stock is in place.

“Even the largest brands do not have the personnel needed to ensure product and promotional material is merchandised exactly according to plan in hundreds of outlets nationwide for a specific launch,” says Julia Collis, sales and marketing director at Headcount Worldwide, part of the WPP Group. “Many clients think they know what they want to take place in store and just assume it will happen. When introducing something new, field marketing companies will apply as much resource as is necessary to get the results a brand needs in those important first few weeks.”

Market leader CPM will usually spend up to four weeks contacting store managers either face to face or over the telephone to raise awareness of a new product. As soon as the launch is under way, the agency uses its reporting data to identify stores where there are difficulties so that problems can be fixed within days while the above-the-line campaign is at its peak.

“It is essential we communicate with the retailers many weeks before an actual launch and the client must allow us to be as flexible as possible in how and when we call on stores. There is only a limited window of opportunity within the multiples,” says CPM sales and marketing director Martin Ryan.

The relationship a brand and its agency have with different supermarkets and the amount of above-the-line activity planned can dictate the level of distribution a product will achieve in its first few weeks.

“Historically, it could take up to 12 weeks to achieve 90 per cent distribution for a new product if a brand relied on the retailers’ own systems, but today we can reach that figure in between four and six weeks,” says Simon Newton, operations director at contract sales agency DVC Sales. “It can be harder with range extensions but with a big product launch backed by high-profile advertising, things can certainly be speeded up.”

A new field marketing sampling tool called Money Box is currently being road tested by marketing consultancy HH&S to encourage interest among multiple and independent retailers. Brands place product samples inside the box which is delivered by Menzies distribution brand Superleague to stores that have signed up to the scheme.

The idea has been piloted by chocolate brand Ferrero Rocher in 300 stores across Scotland and the next trial later this summer will involve 3,000 shops. The initiative is expected to be rolled out nationally by Superleague before the end of the year.

“It is early days, but we will be able to give clients a detailed listing of the retailers we reach with a new product so they can measure the results and next time cherry-pick exactly which stores they want to hit. We can deliver samples the next day to 13,000 CTNs, for instance,” says HH&S managing director Mike Halstead.

If brands leave it too late to plan and implement their in-store activity around a new product, they can discover the quality of the field staff available is not as good as it might have been. This can mean the brand message filters down to consumers at a much slower rate than the sales and marketing teams would like.

Of course, there are occasions when a slow launch is the preferred option. If manufacturing facilities are limited, it can be the sensible option to introduce a product one region at a time. Or if the activity involves a niche brand, part of the appeal of the product can be its rarity.

Toby Knightley-Day, managing director at third-party auditing company TKD, is commissioned by clients to assess how well tactical field marketing campaigns have performed around a product launch. “Traditionally, more resources have been made available for contract field marketing than for tactical, so now we are seeing a move towards what are called ‘contracted tactical’ deals. Brands are retaining an agency on the understanding it will be called on to perform tactical work three or four times a year around key launches so it will have its best staff on hand and in-store work will be implemented in plenty of time,” says Knightley-Day.

The importance of working hard in the field before a new product launch must not be underestimated, whatever the industry sector.

This summer, Peugeot will unveil the Peugeot 1007, aimed at 18- to 35-year-old women. Its agency Sledge is in the middle of a pre-launch campaign in 255 Toni &amp; Guy hair salons prior to the start of the TV campaign in July. The fieldwork will enable the car brand to compare the level of interest among prospects who hear about the launch while having their hair done with those who become aware of the new model via the commercial. The field marketing activity will also build a personality for the new model, says Peugeot advertising manager Dean Drew.

The contacts and experience field marketers have within the in-store environment means their expertise should be tapped into as early as possible when brands are launching a new product.

For those marketing directors yet to wake up to this concept, a strong cup of coffee might just focus their minds.